This blog is for Class XI, Computer Science Students, in Nepal. The blog is the second part of Chapter 5, of the computer science book by Kriti's Publication. Please read the book for details.

This is the second part of this blog where we'll dive into more detail about C programming. Find the first part here.

Some of the features of C programming languages are:

find more on the book

Pros and Cons of Using C

Like any other programming language, C is not perfect and has its benefits and flaws.

Structured Programming Language is a type of programming that generally converts large or complex programs into more manageable and small pieces of code**.** Like any other programming language, the C program has predefined rules called syntax. All programs must contain the main() function.

In the above sample code, int & main are reserved keywords. 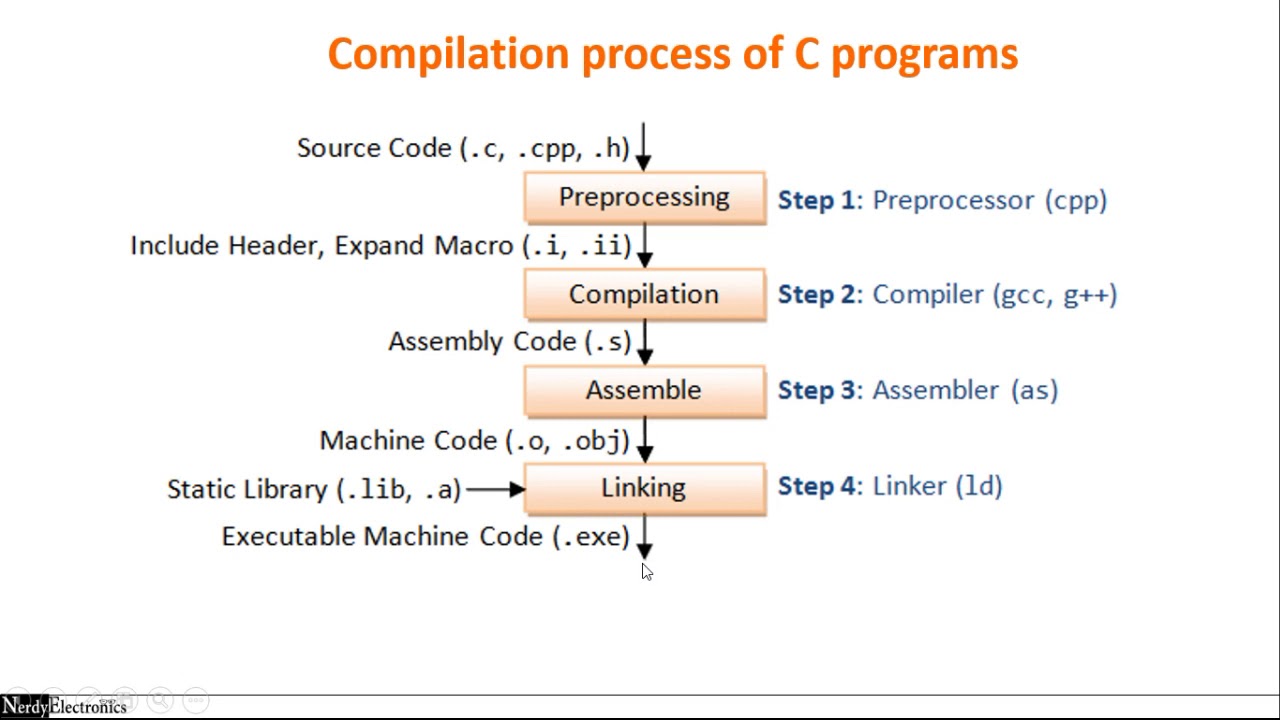 C progam is a source code. It must be compiled into an object program before execution. The compiler won't translate unless the program is error-free. The compilation process can be divided into four steps:

C Preprocessor is just a text substitution tool. It is a step before compilation. It preps the compiler for compilation. All preprocessor commands begin with directives ( symbol starting with hash,#). It must be the first nonblank character, and for readability, a preprocessor directive should begin in the first column.

A directive is a language construct that specifies how a compiler should process its input. They are not part of the grammar of a programming language and may vary from compiler to compiler.

The header files are files to be included in the program. They are defined at the beginning of a program using the #include directive. They have an extension of ".h". For instance, #include <stdio.h> . If the program gets long and difficult to browse you can separate a program into multiple files and use include to merge them by necessity.

Check out the book for a list of prebuilt files and their usage in C.

The alphabet, digits, and special symbols used to write the C program are called character sets. The keywords, identifiers, and variable names are constructed with a combination of characters.

Comments are plain English sentences used in a program. They are used to write pseudocode, the purpose of the program and functions, etc. In C you can write both single and multiple lines comments as follows.

An identifier is a name given to variables, constants, functions, etc. They should always be unique within that program. The identifiers also have other rules:

In a programming language, a reserved word (also known as a reserved identifier) is a word that cannot be used as an identifier, such as the name of a variable, function, or label – it is "reserved from use". This is a syntax-related thing, so, the reserved word may have no user-defined meaning. For instance, int, char, float, for, while, do etc, are all reserved keywords.

Tokens are the smallest elements of a program, which are meaningful to the compiler. The following are the types of tokens: Keywords, Identifiers, Constant(const/#define), Strings("string"), Operators(=, / ), etc.

Data is stored in a computer concerning their data types. Some data can be numbers while others can be strings. Defining data by their types can help in their manipulation quickly. In C, there are two types of data types. They are Primary Data Types and Secondary Data Types.

Find the difference between float and double.

They are formed with a collection of primary data types. They can hold different types of data combinations. Examples of secondary data types are pointer, array, structure, union, etc.

A constant is a variable in c with a fixed value. i.e it cannot be changed once assigned and should always be initialized when declared.

A Variable is a named location in the memory of a computer. It's called a variable because its value can be changed during execution. Variable is an identifier as well. So, the rules for naming variables are the same as identifiers.

The variables can be declared with or without initialization, unlike constants. The syntax for declaring variables are:

There are three different types of variables:

A local variable is declared inside a code block like a function. It is not accessible from outside the block, hence, the name local.

These are variables declared outside of the scope(range) of any function and are accessible from everywhere within that program.

Static variables are the variables that once declared, get destroyed only after the program execution. They have the property of retaining their previous scope value if they are already declared once in the program.

const is equivalent to #define but only for value statements(e.g. #define myvalue = 2). The value declared replaces the name of the variable before compilation.

static is a variable. The value can change, but the variable will persist throughout the execution of the program even if the variable is declared in a function. It is equivalent to a global variable whose usage scope is the scope of the block they have been declared in, but its value's scope is global.

The Escape sequence uses a backslash (\) to escape non-printable characters in the output. For instance, printf("\"Hello World!\"") prints "Hello World" with double quotes.

Format specifiers use the "%" token to input or output variables in C. For instance, printf("%d", variable_name) , prints the value of the given integer variable.

Check out the details in the book.

The smallest executable entity in a program code is called a statement. It is a building block of a code. They consist of keywords, constants, variables, operators, data types, etc.

It is the simplest part of the program and a single-line expression to carry out, for instance, an assignment.

An operator is a sign or symbol that performs an operation or evaluation. An operand is a value or variable declared within a program. For instance, in the expression 4+5 4 and 5 are operands while + is a operator.

The operators that are used to perform mathematical calculations. For instance, +, -, /, *, and %.

These are operators used to evaluate two or more expressions whether they are true or false. Such as &&, || and ! etc. The ! returns true if expressions are not equal, else 0.

Bitwise operators are characters that represent actions (bitwise operations) to be performed on single bits. They operate at the binary level and perform operations on bit patterns that involve the manipulation of individual bits

Check out other operators like assignment, and shorthand operators in your book. Also, check the precedence of operators.

The print() and scanf() are formatted I/O functions.

The getch(), putch() are some examples of unformatted I/O functions.

The blog is alive and will have more sections added in the future. Since the second terminal examination is close, I'm sharing this blog for students to access.

Thanks for reading. It is Nibesh Khadka from Khadka's Coding Lounge. Find more of my blogs @ kcl.hashnode.dev.

Find out more blogs in this series here.

Did you find this article valuable?

Support Nibesh Khadka by becoming a sponsor. Any amount is appreciated!